The Young and the Raceless, A Continued Story of H.A.R.T

Racing is fun: That’s what Reggie Naugle and Jim Muschlits of Philadelphia Region told us when they said we just had to come to an SCCA weekend. They had already involved our son Stephen, he joined them at Summit Point weekends while he was attending college nearby, and soon was “teching.”

Finally July 4th weekend last year we agreed to try it – staying at a hotel, of course, as hubby Frank’s idea of roughing it was black and white TV in the hotel.

What a weekend: By the time it was over Frank was teching, I was timing, and Stephen had bought a racecar, and Austin Mini Cooper. Reggie and Jim were right, racing is fun!

The regular racing season continued. We had fun as we tented in the heat and dust of Labor Day at Summit…fun in the changeable weather at Nationals at Pocono…fun in the cold of NCRRDIC at Pocono, and we were anticipating even greater things. November was to be Stephen’s first Drivers’ School and we were to be Pit Crew. What fun that would be!

Frank thought everything was under control – we had hotel reservations. But the Mini wasn’t ready until 4:30 Friday afternoon of the big weekend. And when Stephen test drove it, it still wasn’t right. Arrangements are made to pick it up after the blackboard session, before 11:30pm. The session was great, but it ran late so father and son make a flying trip – Winchester to Charles Town, to Frederick. Let’s not mention speed. Let’s not mention blood pressure. Tomorrow we’d have fun. Racing is fun, right? 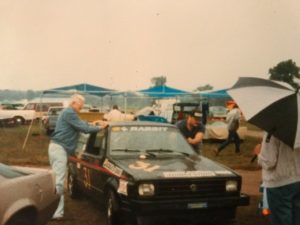 O-dark-thirty Saturday morning. Tow the Mini to the track with Stephen’s Rabbit. Can’t get the Mini ready by 0n-track time – serious tire problems. Frantically strip the Rabbit, install harness, tape lights, stick on numbers. In between times, try to resolve tire problems as the Mini is on jack stands with just 3 inflated tires. I am assured it will take 4 to get it on the trailer. Finally, Mama Di, who has learned that Pit Crew means scrounging, borrowing, making do, and being grubby and dirty while it rains, sleets, snows, blows and is cold, repairs the trailer spare (don’t ask) with silicone sealer and a stone (don’t ask) and that tire is used to get the Mini on the trailer. Stephen was having fun – he was on the track. He passes drivers school with fling colors not often one does it with the tow car instead of the race car. Racing is fun. Father Frank reacts differently. Summit weather in November with only a car to escape to is worse than tenting in the summer, he buys a motor home. Now we are set for the March drivers school. The Mini would be ready, driver and crew are ready and we have a support vehicle. Racing will be fun.

The motor home ran great traveling to the school – even through 6 inches of water in places on the road. Saturday morning bright and early we were ready. The Mini was teched, passed and up to false grid. The sun was even out, erasing memory of the recent snowfall and heavy rain. What? Flooding on the track? Dead cow in the water? School is cancelled? Over and over we say, “I don’t believe this.” Wait: Check the schedule. We can make the drivers school at Pocono. All Right!!!

Well, almost. Frank has to fly (jobs do interfere with fun sometimes). So Di plans to go-it-alone in the motor home to Pocono, assured by Frank that all will be fine. The folks at the truck stop were helpful – they really did try to get the tire changed in time for me to meet Stephen at the appointed time. Finally Mother, Son and new pit crew member, Marty and Dale, Di’s sister and brother-in-law join forces, and are first into the track at 6am Saturday. Excitement builds, the Mini passes Tech. They’re out on the track. THIS IS FUN! What? What do you mean “fried the oil”? Change oil, filter. Another session or 2. What now? How many times can an over-the-hill pit crew push start a Mini. (don’t ask)

So many people help out so many ways – racing people are great. The Mini makes it through the day, work goes on late at night. Someone asks, “are we having fun yet?” 11am Sunday, the Mini has a new breather hole next to the dip stick. Up on the trailer she goes, leaving Stephen needing 1 hour on the track. What now.

Look, we’re the group with HART – Hyatt Auto Racing Team – we never give up. Park the Mini, check the schedule, we’ll take the Rabbit to the one day school at Lime Rock June 1st. Frank’s working again, but Di, Marty and Dale will crew. Stephen drives from West Virginia to Bethlehem, PA. and picks up Marty and Dale. The trailer is in Virginia at his girl friend’s home. Bringing the Mini home from a D.C Region car show, he had a flat. Put on the spare, went 500 yards and the tire disintegrated. 300 yards is the average life expectancy of a silicone sealer/stone patch. (don’t ask) Where do you find 10 inch tires Memorial Day weekend…why didn’t the 12 inch rims fit when the bolt pattern was right? (don’t ask)

The Rabbit with the cheerful 3 arrives at the designated meeting place, a truck stop just off the interstate, and watch as the motor home dies and refuses to restart, stranded in the middle of the access road with 2 lanes of traffic whizzing by. How often does a group push a motor home into a truck stop? JUST ONCE. No repairs are needed: something must have happened because of the sudden acceleration and sudden braking when the tractor trailer almost hit me as I exited the interstate. The rest of the trip to Lime Rock was pleasant except for the radio reports of flooding in New England. We find the track with no difficulty, and with no difficulty read the sign: ALL SCCA EVENTS CANCELLED DUE TO FLOODING. Part of the track is under 3 feet of water. The paddock bridge is gone. Worst flooding in Connecticut in years. Over and over, “I don’t believe this.”

We return to Bethlehem, and stop to see Reggie and Jim. They are kind. They don’t 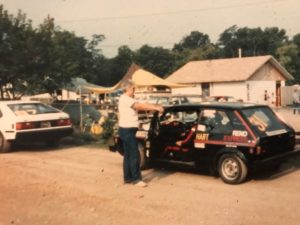 say “racing is fun”. We discuss plans. We tell them we are going racing, as soon as we decide to 1. use number 5 or number 8 bolts in the roll bar of the amphibicar, or 2. Complete wind tunnel testing of Pontoons on the Mini, whichever comes first. Brian Holts is there. In his information he finds good news – there is a drivers school June 9th and 10th at Nelson Ledges, and he has contact names for us.

WARNING!!! Residents of Eastern Ohio, Stephen Hyatt will be at the Nelson Ledges drivers school June 9&10. Flooding may be hazardous for your health and property.

Tune in next month for the continuing saga of HART’s The Young and Raceless. Will Stephen get an hour on the track? Will the Mini ever race? Can a Rabbit once raced ever be satisfied as a tow car again? Will Frank ever go to a drivers school in the motor home? Will Di once again brave the dangers of the open road in a motor home? What is the record for the most number of drivers schools gone to without completing the required2? Will HART be written of as a group of nuts because they are heard to say, “Racing is fun.”

And if you’d like to hear “the rest of the story”, the details that didn’t fit in even this lengthy article, talk to any member of HART.