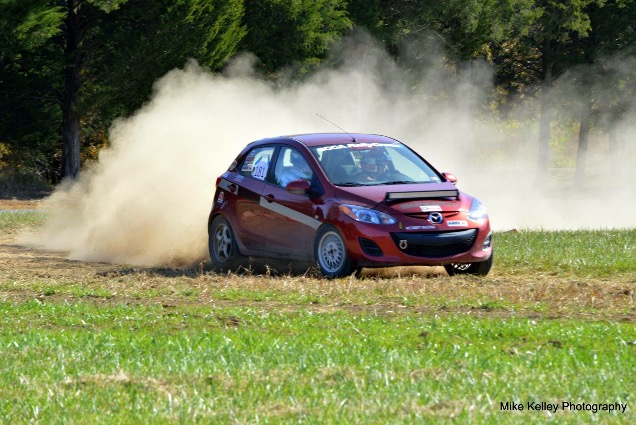 The first Rally Cross event I attended with my dad was at Summit Point. He was driving his old VW Golf which let’s be honest had seen better days. My first thought was “Dad, you’re really going to show up
with this thing?” Boy was I in for a surprise. His car was by far one of the most logical / RX ready car in
the field. (Except for the Subaru’s of course) I went on a few ride-alongs and had a good time, but I can’t say I was hooked.
The next year a new 2014 zeal (it’s red) Mazda 2 followed my dad home and instantly was stickered and numbered. I attended a few more events, helped with the car a little here and there, but went more as support for my dad and to hand out with the over the top personality types that are RX drivers.
During the last few months of the 2015 season I had been joking with my dad about signing up and co-
driving the Mazda with him. He would nod and say “oh sure, as soon as you register I’ll believe it.” It just so happened at the 2015 SCCA WDCR annual banquet I won a door prize of a free entry to RX during the 2016 season. I instantly texted my dad, with I’m sure something like, “nana nana boo boo now you have to let me drive the car.”
Fast forward to Nov. 6th, just a few weeks ago, I’m sitting in the driver’s seat of said Mazda wearing a
hideous bright pink loaner helmet, shaking almost too hard to hold on to the steering wheel. Before that day, I could count on one hand the number of times I’d driven a manual transmission. The starter waved me out on to the course, I dropped the clutch, and I was gone.
My dad was sitting in the passenger seat, probably holding on for dear life, but all I noticed was how fast those dang cones were coming at me!! I was slow. No really, I was extremely slow. To put it into
perspective my first run, was a 1.02 compared to my dad’s .92 and in RX every millisecond counts. I
pulled back into my grid spot, put the seat back, raised the steering wheel up (my dad isn’t a small guy.) I couldn’t believe what had just happened. Even though I was slow, I didn’t hit any cones and most
importantly I had the time of my life.
I honestly don’t know why I didn’t try it sooner or why I was so nervous. I may have finish in third place, out of three, almost a minute behind second place, I may have plowed right threw an entire row of
cones, and I may have stalled the car three or four times, but it was an experience I’ll never forget and a great time with friends and my dad.